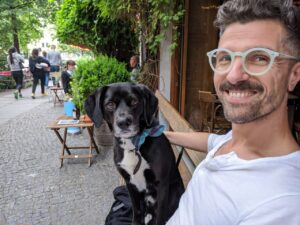 Understanding the world one language at a time – Dàmir Belltheus Avdic speaks over eight languages and has lived in many different regions of Europe. Born in Yugoslavia, he has been at IKEM for 18 months now and is responsible for project acquisition and management in the Innovation and Sustainability team. In the pandemic, he switched from books to podcasts but his love for cheesecake remained the same. You can read more about him in our interview.

Dàmir, you lived in the former Yugoslavia, Sweden, France, and the Netherlands. How did you end up at IKEM?

It was by chance. I was good friends with Anika Nicolaas Ponder, one of the team leaders at IKEM, and she needed support with the project Baltic InteGrid. I then worked for her as a freelancer and saw first-hand the kind of work that is done here at IKEM and liked it. Eventually a position became free, and I sort of gradually started working there, eventually transitioning into working full time at IKEM.

Baltic InteGrid was an international project where English was a necessity. You actually speak many more languages than just German and English. Is that true?

Yes, you are right. I speak Bosnian, English, Swedish, French, German, Spanish, Italian and Dutch. I also studied classical Greek and Arabic and can do a pretty good job of deciphering other languages similar to the ones I speak well. Swedish speakers can understand Norwegian or Danish, for instance, and if you know Bosnian, you can instinctively grasp a lot of other Slavic languages.

That is a very impressive list! How did you manage to learn so many different languages?

I never had problems consciously and quickly recalling memories or making associations between things I know. This is a very useful ability when learning new languages. For instance, if you know that Russian tends to replace the initial H with a G, you will see a word like Голландия (Gollandija) and instantly know that it refers to Holland.  Another example is that historically Arabic first came into close contact with Europe through the French-speaking Crusaders. That is why when I hear the word النرويج(Nurwîj), I am immediately struck by its proximity to Norvège, which is French for Norway.

Or, like me, you have a Bosnian grandmother who uses many ancient Turkish words. The more you know about languages and their origins, the easier it is to understand things without ever having actively learned them.

Besides the many languages that you speak, you have also studied history, economics, and international relations. How does that relate to project acquisition and project management–your current work at IKEM?

My work at IKEM, to a large extent, is based on things like common sense and analytical thinking. Beyond that, having a solid sense of how the world works is also important. For this, studying and knowing subjects like history, economics and international relations is very helpful.

What do you expect from politics in the fight against climate change?

Governments should do more to prepare people for the inevitable sacrifices the climate change will bring – like smaller houses or fewer cars. I feel like every other advertisement is about buying more and more new things, which will produce many tonnes of carbon for decades to come. Humanity is very comfortable with the illusion that everything is fine. The less we prepare ourselves, the ruder the awakening will be in the end.

How would you finish the following sentence? For me, taking responsibility for our climate means…

Realistically, I don’t believe that the responsibility for our climate should be placed on individuals. You can’t expect citizens to research and understand how much carbon is released into the atmosphere every time they buy an avocado or a T-shirt.

It requires more regulations on the institutional level. For example a carbon tax ensures that the damage caused by products is reflected in the price. Then everyone could contribute to protecting the climate – even without having a part-time job in doing emissions research or a PhD in mathematics.