The concept phase is carried out by three partners (Leibniz Institute for Plasma Research and Technology (INP), Institute for Climate Protection, Energy and Mobility (IKEM) (affiliated institute of Ernst Moritz Arndt University Greifswald), Institute for Renewable Energy Systems at Stralsund University (IRES) (affiliated institute of Stralsund University (HOST)) and requires a constructive cooperation of all partners and the support of regional actors and the region in order to receive the contract for the implementation phase from the beginning of 2019. 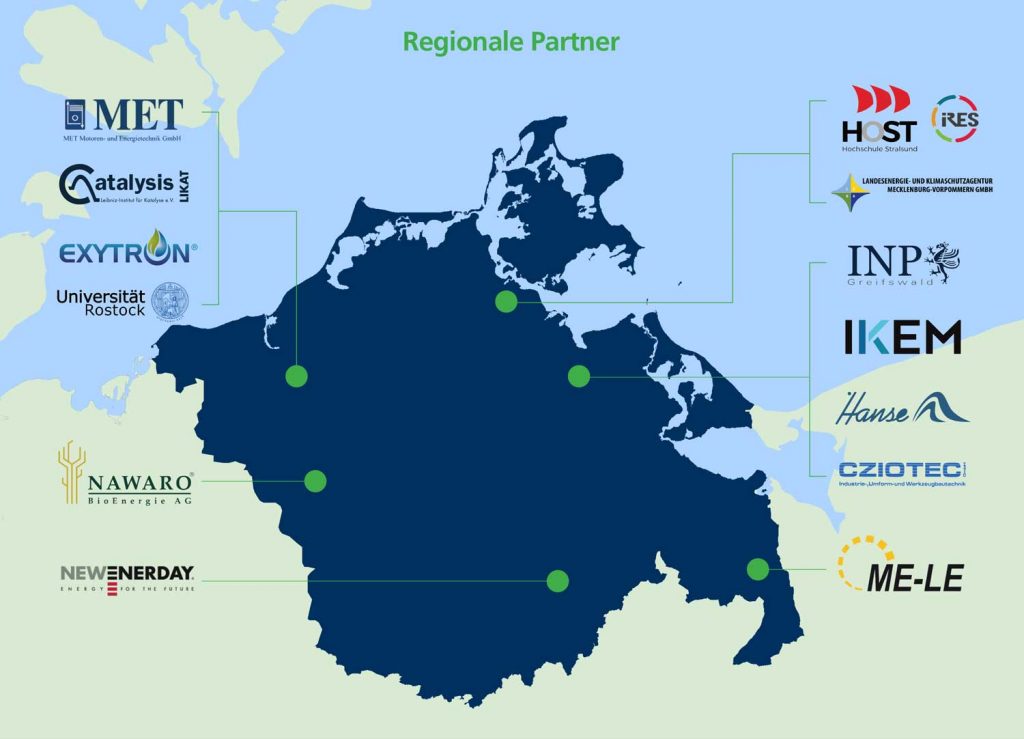 In the context of the energy transition and the increasing expansion of facilities for electricity generation from renewable energy sources, technologies for the storage and conversion of energy and decentralised energy storage are becoming increasingly important in Germany and the world. The considerable expansion of renewable energy sources in the North-East region, for example, has so far mainly led to electricity exports. New energy conversion and storage systems can be used to achieve future links between the electricity, building (heating/cooling) and mobility sectors and, in addition to climate-relevant advantages, also offer additional economic potential for the region. Membranes, micro- and nanostructured materials are the electrically conductive core components of future conversion and storage technologies. They are characterized by high system efficiency and cycle stability and thus offer enormous application potential for energy conversion and storage. They are processed in mass production using thin-film processes that conserve resources, i.e. in particular with comparatively little use of so-called rare earths. The thin-film process has the advantage over the thick-film process used up to now that it is highly material-efficient and conserves resources, and that the target properties required for the application are often only provided by the thin-film form.

Importance of the innovation field for the region

The field of innovation promises high development potential in the field of new electro-ceramic materials for economic ecological energy conversion processes and the production of nanomaterials for such membranes. The research project can contribute to the expansion of hydrogen technology in the region: the existing wind power plants can be equipped with membrane-based electrolysers and new concepts for the direct feeding of the regeneratively produced hydrogen into the natural gas grid can be developed. The natural gas network can thus be turned into a large hydrogen storage facility. The region is predestined for this technology due to its direct connection to the Nord Stream pipeline. The economic efficiency of the power-to-gas processes described is also made possible by the sector coupling to mobility. Furthermore, there is enormous potential to significantly improve the climate compatibility of already established energy technologies such as the diesel engine and biogas power generation. A huge demand is generated here in the maritime industry by the political pressure to change the legal emission limits. In addition to oxy-fuel applications, fuel cells will increasingly be used in maritime mobility in the future, enabling the indirect use of green electricity in this area as well.

In the longer term, the successful development and implementation of new energy process technologies in the energy market is expected to create new industries, increase the number of jobs and improve the overall performance of institutions in terms of innovations in energy conversion processes. In the wider region it will be an advantage in the future that an improved cross-industry capacity for teamwork will develop in the region, thus creating a good basis for the development of other new fields of innovation. This will not least modernise the current forms of organisation and cooperation between the scientific and economic players in the region.  It is expected that the region as a whole will show a stable economy with efficient small and medium-sized enterprises, a stronger national and international network and a higher number of economic activities abroad. In addition, the well-networked universities and colleges will sustainably strengthen the training of specialists. The field of innovation will thus promote structural change in the region as a whole.