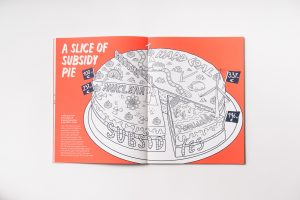 Since 2017, the Infographic Energy Transition Coloring Book has drawn new audiences into the conversation on climate change. As global movements like Fridays for Future gather momentum and accelerate progress, the demand for inclusive communication on climate and energy issues is greater than ever. A new version of the multi-award-winning coloring book features up-to-date content and infographics highlighting the latest developments.

The IETCB was first published in 2017 and quickly won international notice, garnering top honors at prestigious international design competitions like the Malofiej World Infographic Summit and European Design Awards. The book was also praised by climate activists, the general public, and even some world leaders as an educational tool and fun activity book.

Change comes fast in the climate and energy field, and two years after the release of the book’s first edition, it’s time for an update. On 16 July, Berlin-based project developers Ellery Studio and the Institute for Climate Protection, Energy and Mobility (IKEM) are launching a Kickstarter campaign to broaden the project’s reach and connect with climate enthusiasts and change-makers around the world. The funding period ends on 27 August.

With the help of our backers, we can research, illustrate, design, and print a third edition that includes the most recent facts and figures, as well as a new infographic spread dedicated to the inspiring global movement Fridays for Future.

The IETCB responds to the need for an innovative communication format that reaches broad audiences and clarifies what’s at stake as global temperatures rise. The comic-style infographics make complex climate- and energy-related issues accessible to people of all ages, inspiring engagement and enabling effective action. To confront issues of this magnitude, it’s essential to spread the message as widely as possible. After all, we need everyone on-board to keep our planet cool and blue!

And the book’s success didn’t end there. After the IETCB’s publication, the US magazine Fast Company named it a finalist for the 2018 World Changing Ideas Award. At the prestigious Malofiej 26 World Infographic Summit, the IETCB won the Main Award for Climate Change and Environmental Commitment Best Graphic and the Gold Award in the “Informative Format” category. It also received the Gold Award at the 2018 European Design Awards and First Prize in the “Corporate Communications and Public Relations”  category at the 2018 German Press Agency Infographic Awards.

Campaign duration: Our funding campaign runs from 16 July – 27 August 2019. A separate crowdfunding campaign will begin in late 2019 to finance a German translation for our domestic fans.

About the team: The Institute for Climate Change, Energy and Mobility (IKEM) is a Berlin-based NGO that conducts interdisciplinary research exploring energy transition pathways toward a sustainable society.

Ellery Studio for Creative Strategy is an international team of designers, illustrators, planners, and makers who use visual storytelling and infographics to create content that structures communication and facilitates decision-making.