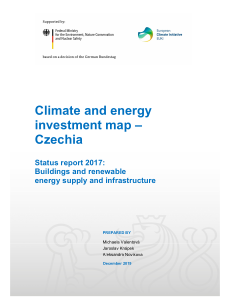 The climate and energy investment map (CEIM) for Czechia aims to inform the discussion on current domestic investment of the country into meeting EU 2030 energy and climate targets. Using data from the year 2017, the report identifies, tracks, and explains the amount of public and private money invested in technologies and other tangible measures in Czechia that lead to GHG emission reduction. The report covers the buildings sector as well as the renewable energy supply and infrastructure sector. It also assesses methodological and data challenges.

The main source of investment tracked was private investors, consisting of households and corporate actors, which contributed 60 % of the total investment (EUR 406 million). The rest of investment flowed from public sources, mainly from EU Funds and the country’s public budget, including budgets at national, regional, and local levels. Grants offered by public actors played the major role in driving both private and public investment. The main intermediaries assisting in the use of instruments were ministries and their agencies, as well as the capital market.